We will show you products that fit your motorcycle

Chrome PRO: Designed for the most demanding rider

The Chrome PRO is the latest evolution of the Chrome family further extending the functionality of the Plus version. Designed for the most demanding riders / team, the PRO extends to 12 the number of channels available at 100Hz, it can manage the acquisition of heartbeat through bluetooth heart rate sensor, has a totally configurable can-bus for the 12 inputs, it can also connect to an internet hot spot to communicate with the ChromeLaps site managing the laptimes via internet in real time.

Thanks to the power of the Chrome PRO it is now possible to implement DDS (Danas Dynamic Settings) which enables the ability to change some parameters like map or traction control level corner by corner on every track! (now available on ZX10R 2016 and Yamaha R1 2015+).

The Chrome PRO also incorporates a 433Mhz receiver that allows it to interface with our supplied TPMS sensors. Additionally, you can order the PRO with a full carbon exterior case, reducing the weight of the instrument panel by 25%.

Thanks to the possibility to manage WiFi connections, Chrome PRO can connect to an internet hot spot to communicate with i2m's ChromeLaps site. The ChromeLaps site allows you to keep track of your days on the track, divided by sessions and then having your own personal transponder. Thanks to the public area of the site you can also see, on each circuit, the timing of who is sharing their data, offering a comparitive and competitive aspect. The Chrome PRO joins this feature to the possibility of having up to 12 analog 100Hz channels totally programmable as Can-Bus inputs (bringing to 33 total channels read), a 433 MHz receiver for TPMS sensors and the possibility to connect to a band heart rate monitor.

Thanks to the new internal software it is possible to connect to the Chrome PRO a bluetooth antenna so that it can be interfaced with a Polar WearLink heart rate sensor. A heart-shaped icon on the screen will indicate the connection made by beating the heart on the screen in proportion to your heartbeat. The data are then acquired in order to be re-examined later in order to plan a correct physical and targeted training based on personal physical effort.

The Chrome PRO integrates a 433MHz receiver that allows it to receive signals from i2m's TPMS sensors. It is therefore possible to always monitor the pressure of both tires and the temperature of the rim so as to check for example the correct heating with the electric blankets. Configurable alarms allow the RGB leds to be set to signal any anomalous pressure and temperature values. The values are then acquired so that they can be processed later. The Chrome PRO comes complete with two TPMS sensors with corresponding 90-degree valves that can be requested in 8.5 mm or 11.5 mm diameter.

Note: Motorcycles with dash-driven headlights may lose headlight functionality, this applies specifically to the BMW S1000RR and may apply to the RSV4 or other models. The BMW S1000RR I2M Chrome has only been developed with the HP ECU. 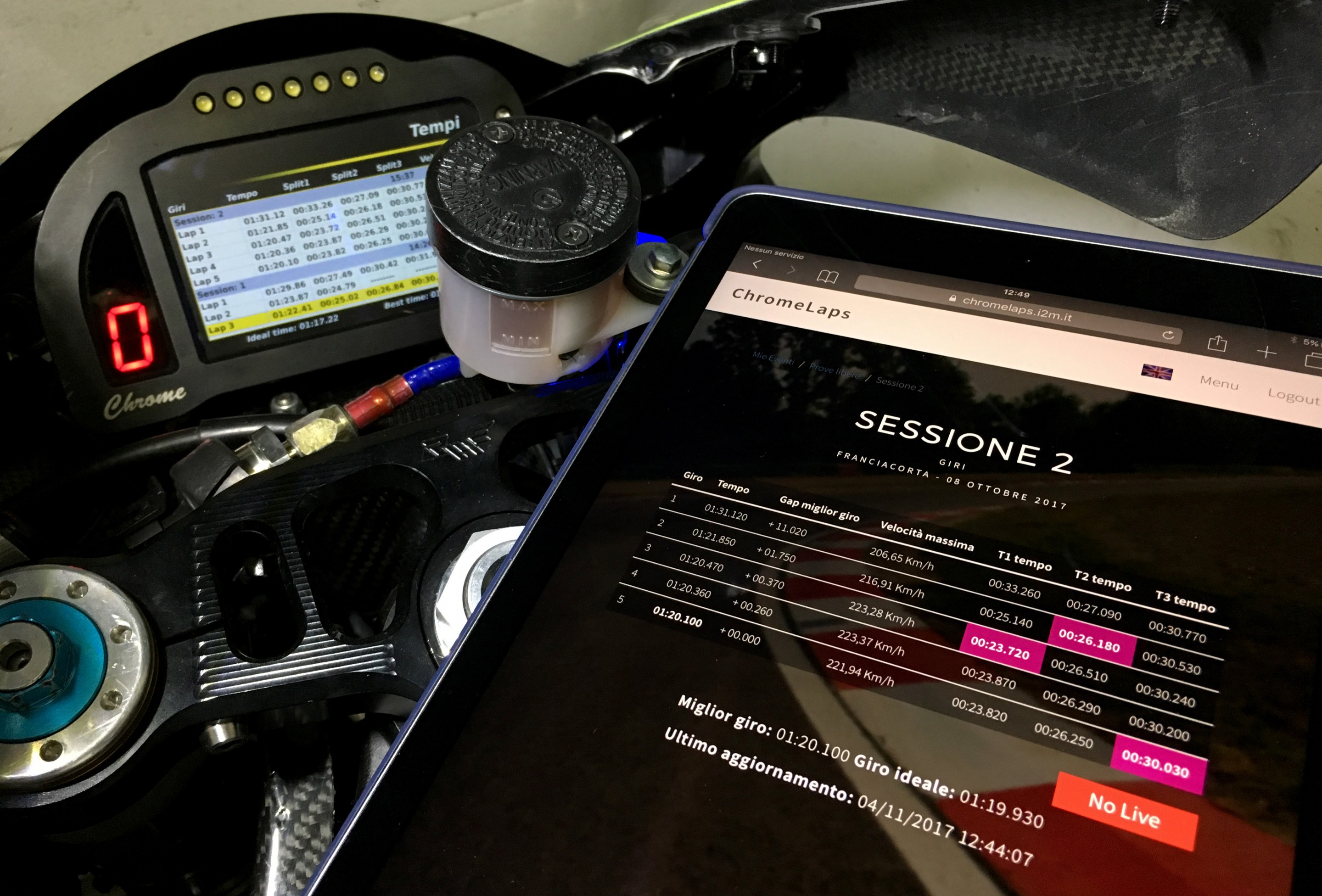 Plug and play wiring kits available for the following bikes: 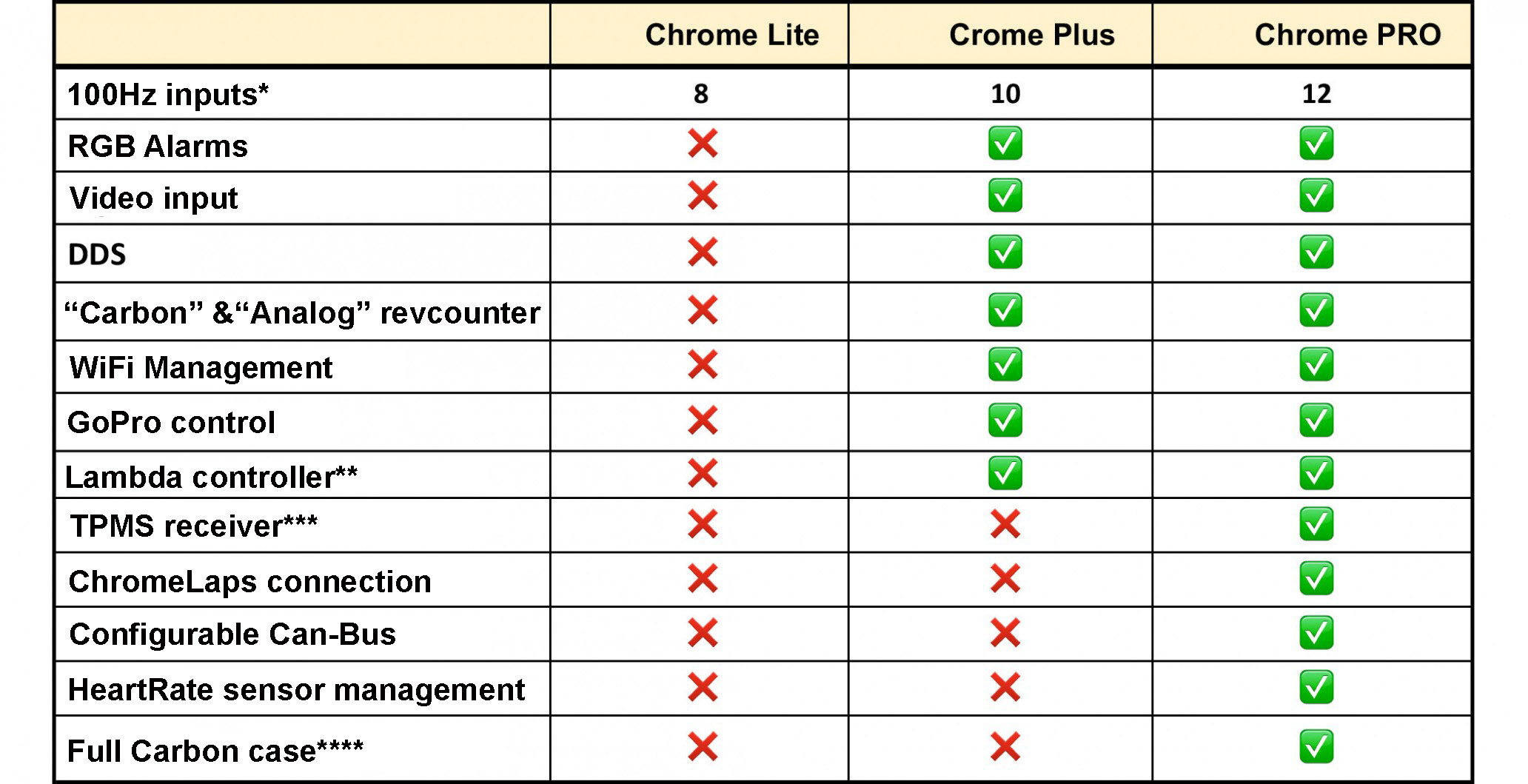